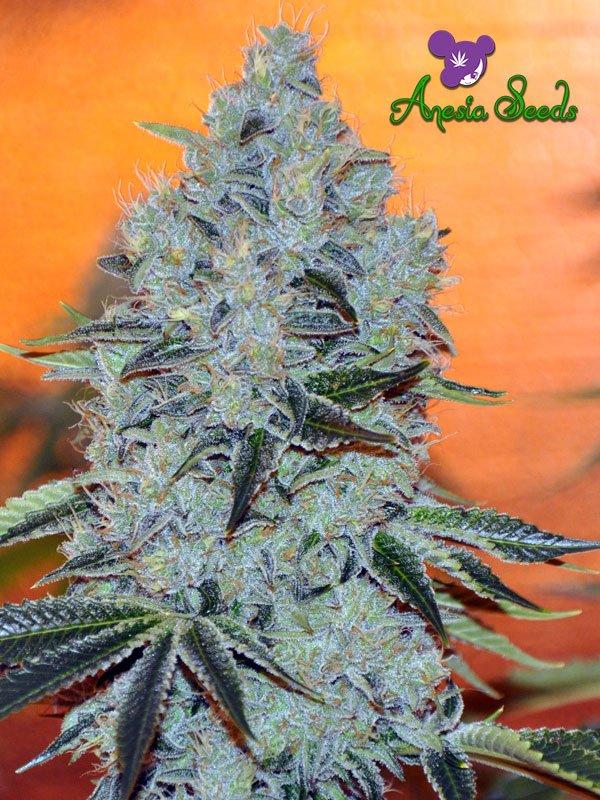 The rare Mob Boss genetics of Anesia is an extremely resinous, potent, and high-yielding cannabis strain that sets new standards. To develop the Mob Boss strain ANESIA Seeds crossed a Chemdawg D with a Tang Tang and selected the resulting plants for potency and big yields over several generations. We stabilized the genes over many generations and have brought with it a true miracle of resin on the market.

Mob Boss has 2 phenotypes, which differ slightly in the growing and blooming period. The flowering time of the stocky growing variation is 60-65 days, while the higher growing pheno requires 5-10 days more to mature fully. During her flowering phase, she produces yields of 700g per square meter. Outdoor she can be harvested in early October and you can look forward to about 800g per plant. Because of her huge resin production, this strain is well suited for the production of BHO and other extractions.

The aroma of the Mob Boss is very fruity with berry notes. The first Pheno offers strong psychedelic effects and triggers daydreams while the second pheno delivers a more clear and energetic head-high. Mob Boss relaxes the body and is an ideal strain for the weekend with its unique intensive and versatile effects. It helps to relax your mind and body while recharging you.
The Mob Boss strain is rare and special cannabis genetics which could be saved and stabilized by Anesia. With their extremely frosty and resinous flowers and their high production, she has made herself a name and inspires every grower who once cultivated her. The buds look impressive crystalline and often red or purple colored. The effects of Mob Boss are long-lasting, extremely strong, and fast hitting. She has a THC content up to 28,7% and is especially recommended for experienced users.

Mob Boss is a perfect plant for SCROG methods, as it will produce large colas on well-trained side branches and continues growing more dense into the next time. This plant seems give the best combination of yield and quality when grown hydroponically.

This strain is used for mood elevation, appetite stimulation and for pain relief. It is a strain for daytime use.