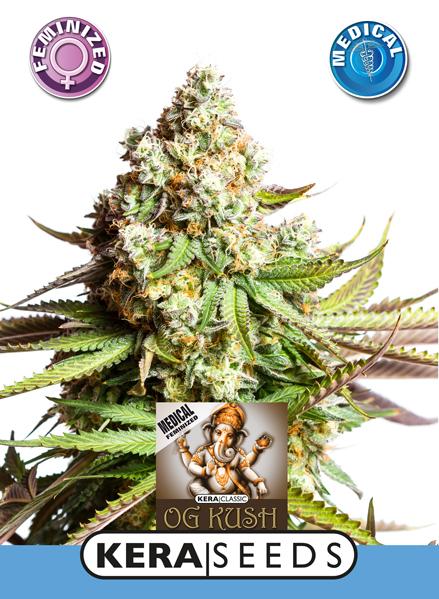 OG Kush is considered one of the ultimate Kush varieties and is famous all over the world because of its strong and complex effects and intense flavor. Many Hollywood celebrities, rappers, medicinal users and die-hard blowers have indicated that this is their favorite type when it comes to power. The meaning of ‘OG’ in the name is much discussed, but they never doubt the strength.

The true genetics are unknown. Some say OG Kush is a mix of ChemDawg with a Lemon Thai and Pakistani Kush. Others say it’s just a special cutting of the ChemDawg is from the early nineties. Even on the meaning of the name OG is discussed; some argue that it means Original Gangster. Most people would agree that, because of its origin, means Ocean Grown.

Kush is a Hindu boy’s name. It means `son of Hindu God`.

Kush is a type of the indica variety. There are many forms like Bubba Kush and OG Kush. Kush cannabis originates from plants from Afghanistan, Iran, Pakistan and the north side from India. The name refers to the Hindu Kush mountains.

OG Kush is known that they will stretch slightly during growth but quickly fills up during flowering. Generally, it is 90 to 160 cm high. The buds are large and thick; lime green clusters covered with a thick layer of resin. There are many good reasons why OG Kush has become so popular. Now available as a feminized variety & quality of the Kera Classic line, so you can try out this amazing strain yourself. The effect is as strong and complex as the flavor. OG Kush grows eight weeks and the average yield is 65 grams per plant.

The effect of OG Kush is as strong physically and mentally. OG Kush is predominantly governed by Indica genes, but the ultimate thrill that you feel is absolutely the Sativa and is quickly followed by a body relaxing and numb sensation.