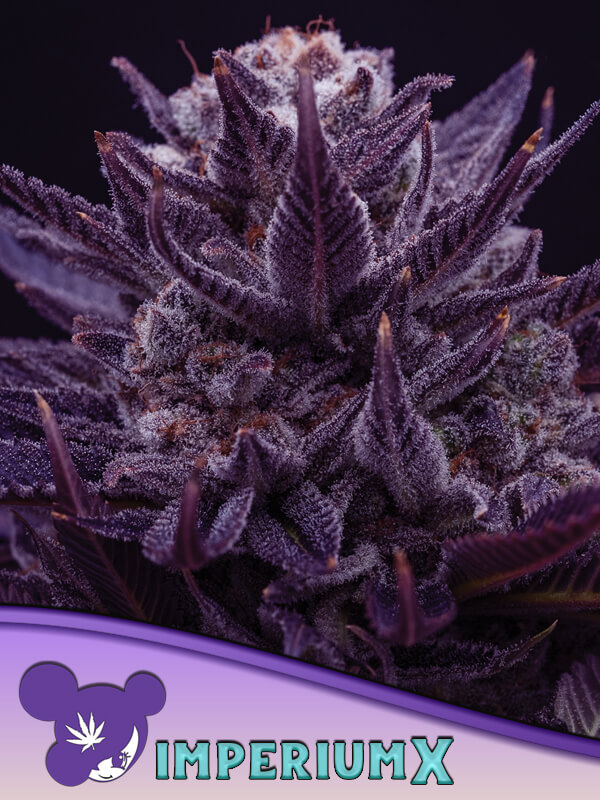 Imperium X is one of the strongest strains in the world, combining outstanding traits like no other cannabis strain before. She is based on three extremely THC-rich cannabis strains: the rare City of God, The White Angel, and our overwhelmingly potent Future #1. The 3-way cross has resulted in a strain that exceeds all expectations and pushes the boundaries of what is possible.
Imperium X can reach THC levels of 36% and more in the upper range, and her powerful, deep and far-reaching effects cannot be explained by the cannabinoid THC alone. We assume that the strain also has a relatively high THCP value. It makes you fly higher than any other strain and is a whole universe of positive, euphoric, stimulating, sensory-expanding, and narcotic effects that roll over your mind and body like a massive energy-filled roller. The effects last endlessly, are out of this world and include, both intense relaxing components and euphoric effects that send you into a real frenzy of creativity and give you a powerful energy boost. Users with a high tolerance will find it an exceptionally intense experience, and inexperienced users can quickly and easily underestimate it with only a small dosage. Once it is dosed a little too high (and this happens very easily), it can easily tie you to the couch for hours and beam you away completely. The strain is the epitome and the ultimate in cannabis effects. So complexly versatile and intense that we could write pages and pages about it, but some things can’t be described, they can only be felt.

Her dense, heavy flowers are like bunches of grapes and produce a staggering amount of resin that coats the buds in a thick sticky layer. The aroma is sweet, fruity, and reminiscent of pineapple with a pleasant hint of sandalwood. During the flowering period of 9-10 weeks, it produces abundant yields. It can be grown both indoors and outdoors and develops its full potential under optimal light and growing conditions. We recommend a growing period of 4-5 weeks. The use of UVB light for several hours per day and in the last 3 weeks helps to further increase the number of trichomes.

From the seeds emerge vigorous plants that grow quickly and form countless frosty buds. The plants and flowers of Imperium X often develop a purple coloration and can even turn almost black. Just as epic as her effect is her appearance, which gives you an idea of the genetic power you are dealing with.